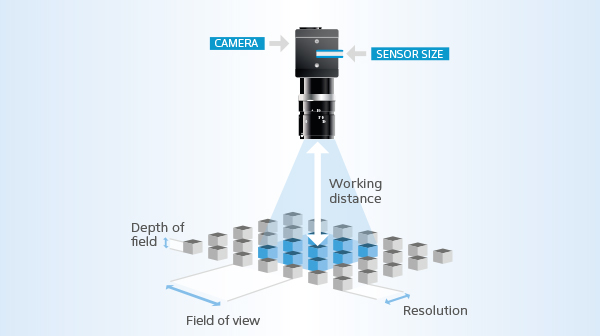 Machine vision can be found anywhere that automated inspection of industrial processes are required, where swift performance of such tasks as product analysis; scanning & checking; shape & pattern comparison; gauging of measurement, position & rotational angle; OCR and reading of both 1D & 2D codes.
Although the technology underpinning machine vision has adapted, modified and enhanced over time, there are some high-level concepts which need to be understood if it is to be planned and incorporated properly into an appropriate business application.

In the movie industry they have something they call the “elevator pitch”; it is how you explain your idea to a busy studio exec in the time it takes to get between floors. In general you have under 30 seconds. Here’s the one for what we’re explaining, here:

Machine vision systems comprise several components which operate together to capture an in-process image and perform some work on it.

That is it at its simplest.

The kind of image to be captured, what data is to be extracted, the kind of analysis is to be performed, where those things are meant to take place, how it integrates into the rest of the business process, and not to put too fine a point on it how big the budget is, are all factors which come in to the decision-making when specifying a machine vision system.

So, what does it do?

One common myth which should be dispelled is the concept that ALL a machine vision system does is compare a “good” picture with the images of parts passing the camera. That is ONE kind of simple analysis which is available in some implementations, but by no means is it the only thing machine vision can do.

These systems can be as simple or complex as the job you need them to do. Most will match and process discrete geometric features within a machine vision image and apply some algorithm to it, commonly including: blob analysis, edge extraction, and pattern matching.

There are a great many of these algorithms available through different processing tools and able to offer a wide variety of inspection and analysis to fit in with the target application. The combination of tools will largely be defined by what work you want done on the image by the system. Before it can do any work, though, it must first capture that image…

General consensus puts 80% of inspection reliability, and overall success, down to the camera correctly imaging a properly lit and oriented object.

Usually, the camera and lighting are fixed relative to the process which is moving objects through the field of view (FOV). So orientation of the parts must be part of the choice in locating the cameras, although some machine vision software tools do enable object orientation to be corrected in-flight.

The choice of lighting is crucial to properly capturing the best image. The point of the lighting is to highlight the features of interest and so must be chosen, and sited, with particular care. Skilled personnel and specialised lighting schemes are often significant factors in achieving success with machine vision.

Much of the lighting involved is produced by LED (light-emitting diode) units, although sometimes fluorescent lighting is used. Natural (sunlight), incandescent and ‘ambient’ lighting should be avoided at all costs in order to achieve consistent results, which, as we’ve said, is paramount.

All cameras used in machine vision have, as a measure of their resolution a number of pixels (analogue cameras have an effective pixel measurement specified by the manufacturer). The higher the number of pixels, the smaller each image can be broken up into tiny segments.

A well-known rule-of-thumb is that a feature must be a minimum of four to nine pixels in area to be detected, and between 60 and 70 pixels for recognition.

As mentioned before, objects pass through the camera’s FOV and it is at this point that the camera will capture an image. If that FOV is 128mm square and the camera has a resolution of, for example, 2816Ã—2816 (giving approximately 8 megapixels), that would mean the camera could “see” something as small as 0.4mm square, realistically, and recognise a feature with an area of 3mm square.

If the FOV is reduced, or a higher resolution (controlled by using a suitable lens) is used, smaller features can be recognised. You can see, then, that choosing the right specification of camera is critical to a successful machine vision implementation.

With the advances in technology for machine vision systems, imaging and computing devices become smaller and faster. Cameras (both analogue and digital) are connected up to industrial computing infrastructures for both control and analysis.

Communication interfaces between cameras and other plant equipment, such as ethernet, serial and direct I/O signal wires, among others, can allow machine vision systems to control entire processes without manual supervision or input.

With all that data being collected and transferred, especially when in conjunction with an IT
infrastructure, there is a natural benefit to the quality function of a business, both in terms of records for regulatory purposes and for the quality engineer to review, detect and correct with relative ease.

Smart cameras are heavily influencing the applications for machine vision systems and expanding the scope of the possible specifications available. Much in the way of research is necessary when contemplating the use of smart cameras, however.

In essence the smart camera is a ‘normal’ digital imaging camera with a built-in computer. The breadth of possible features and specifications as you move from manufacturer to manufacturer means that you can find almost any configuration you need if you look.

Putting it all together

Throughout we have been emphasising the end goal of a machine vision system implementation, which it to integrate it into the business proper. That is where the specifications will always start, as well.

The existing business and industrial processes must dictate the parameters for the machine vision system, for example, there is no point having a machine vision system of the highest possible resolution in grey-scale, when the application for it is to detect and count the number of pepperoni pieces on a nine inch pizza.

With a proper requirements-capture process, and diligent investigation of the elements mentioned in this article, you will be well on your way to making a well-integrated machine vision system.

No Responses to “Machine Vision Fundamentals”